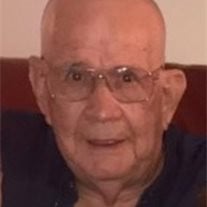 Perry, Georgia - Clarence Harrell, 82, passed away on Friday, March 8, 2019. Visitation will be on Tuesday, March 12, 2019, at 1:00 p.m. at Houston Lake Baptist Church. The funeral service will begin at 2:00 p.m. after the visitation at the church. A private family burial will be held in Woodlawn Cemetery. In lieu of flowers, the family respectfully requests memorial contributions to Houston Lake Baptist Church, 2300 Highway 127, Perry, GA 31069. Clarence was born in Adel, Georgia, the youngest of thirteen children to the late Enoch and Ennis Jones Harrell. He grew up in Adel helping his father on the family farm. He proudly served our country in the U.S. Army as a Hercules missile operator during the Cuban Missile Crisis. Clarence was an insurance salesman for United Insurance Company for over 30 years. He developed a love for billiards that began in Okinawa and continued through his adult life. He never met a stranger and had a fabulous sense of humor. Clarence was a long-time member of Houston Lake Baptist Church and enjoyed cooking in the backyard for his family, church family, and friends. He was preceded in death by his parents; his siblings; an infant daughter, Margaret Ann Harrell; and his beloved wife of 44 years, Frances Harrell. Left to cherish the memories they made with “Papa,” as he was lovingly referred to, are his children, Chuck Harrell (Elizabeth) of Monroe, GA, and Karen Harrell Holmes of Perry; his grandchildren, Daniel Harrell, Michael Cain, Jr., Shayne Holmes, and Diamond Holmes; seven great-grandchildren; and many nieces and nephews. Condolences for the family may be left in the online guestbook at www.watsonhunt.com. Watson-Hunt Funeral Home has been entrusted with the arrangements.

The family of Clarence Harrell created this Life Tributes page to make it easy to share your memories.

Send flowers to the Harrell family.