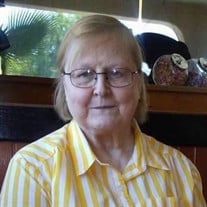 PERRY – Cilla Mae Skinner Presley, 76, passed away peacefully on Tuesday, February 1, 2022, after an extended illness. Services will be held on Saturday, February 5, 2022, with the Visitation at 1:00 p.m. and the Funeral at 2:00 p.m. at Henderson Baptist Church. Burial in Perry Memorial Gardens will be private. In lieu of flowers, the family respectfully requests memorial contributions to be made to Heart of Georgia Hospice, 103 Westridge Dr, Warner Robins, GA 31088 Cilla was born in Macon, Georgia and grew up with her paternal grandparents, Elvin and Cilla Skinner, in Jones County. She was a graduate of Jones County High School, class of 1963. She greatly enjoyed reading and her IPad. She cooked and was known for trying new recipes. She loved her church and church family and was active in her Sunday School Class, In His Service. Cilla was preceded in death by her parents, J. Hugh Skinner and Lois Wooten Skinner; her husband, Larry Lamar Presley, Sr.; her brothers, Bruce Skinner, Hugh Skinner, Terry Skinner; and her sister, Barbara Henson. Survivors include her son, Lamar Presley, and daughter-in-law Rochelle; her daughter, Christy Riley and son-in-law Rick; her siblings, Gloria Russell, David Skinner (Lindy), Carolyn Skinner; brother-in-law, Ricky Henson; sister-in-law, Reba Skinner; and a host of nieces and nephews. Condolences for the family may be left in the online guestbook at www.watsonhunt.com. Watson-Hunt Funeral Home has been entrusted with the arrangements.

Send flowers to the Presley family.