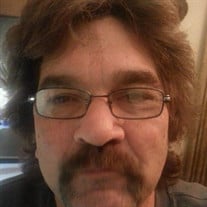 PERRY – Christopher Scott “Chris” Martin, 58, passed away on Saturday, January 16, 2021, after an extended illness. The family will receive friends on Friday, January 22, 2021, from 3:00 p.m. until 7:00 p.m. at the home of his son, William Vorreyer. Chris was born in Columbus, Indiana, and moved to Houston County when his father, who was in the U.S. Air Force, was transferred to Robins Air Force Base. Chris graduated from Northside High School with the Class of 1980. He was an On-Board Airplane Mechanic with Zantop International Airlines for twenty years. When his health began to decline, he worked at Specialties Services for over ten years repairing small engines. He enjoyed spending time with his family and going to the beach. He had a green thumb, planted, and worked on his yard when he could. As his kidneys continued to fail, though, Chris had to give up work and stay home. His loving and devoted wife of nearly fourteen years, Cindy, who had been by his side for twenty-two years, became his primary caregiver. Their time together was treasured by both. Chris loved old cars, particularly Corvettes, and was the proud owner of a 1927 T-Bucket, which he tinkered on and perfected to his liking through the years. Left to cherish the memories they made with Chris are his wife, Cindy Martin of Perry; his mom, Carolyn Martin of Warner Robins; his children, Shawn Vorreyer (Lilly) of Texas, and William Vorreyer (Lindsey) of Perry; four grandchildren; his mother-in-law, Corine Hutchings of Crawford County; his siblings, Kenny Martin of Florida, Amy Martin Bond of Atlanta, Kirsten Bates of Virginia, and Gavin Mahsman of California; and several nieces and nephews. He was preceded in death by his mother, Carol Martin, and his dad, Ken Martin. Condolences for the family may be left in the online guestbook at www.watsonhunt.com. Watson-Hunt Funeral Home has been entrusted with the arrangements.

The family of CHRIS MARTIN created this Life Tributes page to make it easy to share your memories.

Send flowers to the MARTIN family.