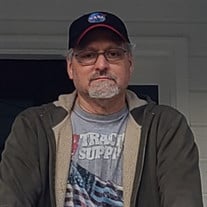 PERRY – Chris G. Dunn, 56, passed away unexpectedly on Monday, April 5, 2021, after having lived with Type I Diabetes nearly half of his life. The family will receive friends on Saturday, April 10, 2021, from 11:00 a.m. until 1:00 p.m. at Watson-Hunt Funeral Home. Funeral Services will be held on Saturday, April 10, 2021, at 4:00 p.m. in the Chapel at Watson-Hunt Funeral Home. Interment will be in Roberta City Cemetery immediately following the service. In lieu of flowers, the family respectfully requests memorial contributions to Juvenile Diabetes Research Foundation, 200 Vesey Street, 28th Floor, New York, NY 10281 or Open Doors USA, P. O. Box 1595, Merrifield, VA 22116. Chris was born in Macon, grew up in Roberta, and graduated from Crawford County High School with the class of 1982 where he was a scholar athlete, having participated in football and track. Upon graduation, Chris proudly joined and served our country in the U.S. Air Force Reserves where he was an aircraft mechanic. He completed many educational courses and earned numerous certificates and licenses that he would need to be successful in his future. Chris worked for nearly forty years in the Aircrafts and Aeronautics industry. Through his career, he worked for Boeing and most recently worked with NASA. For over twenty years, he was assigned to and worked at various locations across the country, sometimes as long as three to four years in one place, yet he kept and maintained his home in Perry. Chris was very focused on his family; his family was his life. Spending time with his children and grandchildren were moments that he treasured. He was an outdoorsman, enjoyed hunting, fishing, and exploring the gifts of nature that God created. Chris was a Christian and always tried to do the right thing, leaving an example for his family of kindness and selflessness. He would help anyone who needed assistance, always for nothing in return. He even donated one of his kidneys to one of his brothers. Left to cherish the memories they made with Chris are his sons, Kennon Dunn of Warner Robins and Curtis V. Dunn of Perry; his grandchildren, Brice Dunn, Carley Dunn, Elijah Dunn, Abby Dunn, Levi Dunn, and Christiansen Dunn; his mother, Frances Dunn; his brothers, Warren Dunn (Susan) and Casey Dunn (Di); and his nieces and nephews, Ashley Dunn, Ben Dunn (Jaimy), Jeremy Dunn (Julie), Amanda Dunn Humphrey (Jeremy), Morgan Dunn, Katie Dunn, and Travis Dunn. Chris was preceded in death by two brothers, Curtis B. Dunn and Carey Dunn; and his father, Hugh D. Dunn. Condolences for the family may be left in the online guestbook at www.watsonhunt.com. Watson-Hunt Funeral Home has been entrusted with the arrangements.

The family of CHRIS G. DUNN created this Life Tributes page to make it easy to share your memories.

Send flowers to the DUNN family.