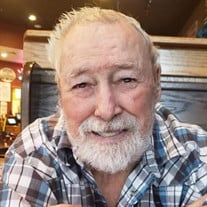 PERRY, GA – Charlie was born in Athens, Georgia, on October 11, 1931. He died at the age of 90 on Saturday, April 9, 2022, after a brief illness. The family will host a Visitation on Wednesday, April 13, 2022, from 5:00 until 7:00 p.m. at Watson-Hunt Funeral Home in Perry. A Service with Full Military Honors will be held on Thursday, April 14, 2022, at 12 Noon at the Pavilion in Andersonville National Cemetery. In lieu of flowers, the family respectfully asks that donations be made to honor Charlie to the Alzheimer's Foundation of America, 322 Eighth Avenue, 16th Floor, New York, NY 10001. Charlie joined the Army/Air Force in 1952 as an Air Policeman and later transferred to the canine unit as an Air Police canine trainer. He re-enlisted in the Air Force in the vehicle maintenance field. While stationed in Southeast Asia, he was sent TDY to Vietnam. He subsequently retired from Robins AFB in 1970. Charlie was an accomplished musician and played bass in a country western band while stationed in Thailand and then back in the States. After retirement from the military, Charlie operated a Gulf gas station and ran a wrecker service in Perry for many years. He also served as a volunteer fireman for the Perry Fire Department. Charlie first met his wife Frances while riding the school bus together. They married in 1952 and had five children together. During the 50+ years they were married, the family moved all over with the Air Force and upon retirement finally settled in Perry, Georgia. They enjoyed fishing together and holding fish fries for their friends. Charlie enjoyed his second retirement by reviving his hobby of building model airplanes. He was a member of the Perry Flying Club and the Georgia Aircraft Modelers Association. His great joy was going to different flying fields, including his favorite--Mac Hodges Field in Andersonville-- to fly his RC planes and spend time with his fellow flyers. You always came away smiling and shaking your head after meeting Charlie. He definitely made an impression on those who met him until the very end. Charlie is survived by his children, Ricky (Jeanne) Hayes of Cedar Bluff, AL, David (Jennifer) Hayes of Gordon, GA, and Charlotte (John) Haines of Perry, GA; and many grandchildren and great-grandchildren. He was predeceased by his beloved wife, Frances White Hayes; and their daughters, Rose Marie and Patricia Irene. Condolences for the family may be left in the online guestbook at www.watsonhunt.com. Watson-Hunt Funeral Home has been entrusted with the arrangements.

The family of CHARLES "CHARLIE" HAYES created this Life Tributes page to make it easy to share your memories.

Send flowers to the HAYES family.