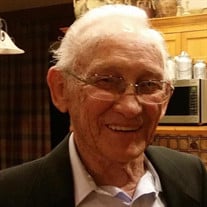 PERRY- Mr. Carroll Carter Underwood, 94, passed away peacefully on Thursday, February 20, 2020. Services will be held on Sunday, February 23, 2020, at Heritage Baptist Church with the Visitation beginning at 1:00 p.m. and the Funeral Service beginning at 2:00 p.m. Interment will be handled by Smith-May Funeral Home in Sandersville at Bronwood Cemetery at a later date. At the request of Mr. Carroll, flowers should be omitted, and memorial contributions made to Talents Empowered, c/o Rebecca Moody, 905 Jernigan Street, Perry, GA 31069 or to the donor’s favorite charity. Mr. Carroll was born in Greensboro, Georgia, to the late John and Gertrude Carter Underwood. He earned a Bachelor’s Degree in Electrical Engineering from Georgia Tech. He proudly served our country in the U. S. Army during World War II as a specialist with the Army Airways Communications System completing tours in New Guinea, the Philippines, and Japan. Carroll had a successful career as the Executive Director of the Southwest Georgia Regional Development Commission retiring after thirty years. He was an active member of Heritage Baptist Church. He loved the Lord, his church, and his church family. Mr. Underwood worked, contributed and prayed as Heritage began plans for a new facility and was thankful to live to see his church moved to their new home on Lake Joy Road. He was preceded in death by his loving and devoted wife of sixty-two years, Lila Underwood; and three brothers, John Underwood, Weymon Underwood, and Lowell Underwood who passed away on the same day as Carroll. Left to cherish the memories they made with Carroll are his son and daughter-in-law, Michael and Jan Underwood of Perry; his grandchildren, Maria Willard (Jimmy), Kari Ann Carpenter (Greg), and Michael J. Underwood; his “lady friend,” Doris Williams; seven great-grandchildren; and six great-great-grandchildren; his siblings, Gilbert Underwood, Perry Underwood, Claire Hertzler, and Lanelle LaRue; and many nieces, nephews, great-nieces, and great-nephews. Condolences for the family may be left in the online guestbook at www.watsonhunt.com. Watson-Hunt Funeral Home has been entrusted with the arrangements.

PERRY- Mr. Carroll Carter Underwood, 94, passed away peacefully on Thursday, February 20, 2020. Services will be held on Sunday, February 23, 2020, at Heritage Baptist Church with the Visitation beginning at 1:00 p.m. and the Funeral Service... View Obituary & Service Information

The family of Mr. Carroll Carter Underwood created this Life Tributes page to make it easy to share your memories.

Send flowers to the Underwood family.