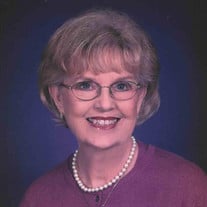 ROBERTA – Carole Hays Holland, 85, went Home to be with her Lord and Savior on Friday, April 3, 2020, after a brave and courageous battle with cancer. Due to the current national pandemic and the limitations placed on the number of people at gatherings, a private Graveside Service will be held for the immediate family next week in Roberta Cemetery where she will be laid to rest beside her late husband, B.W. Once the restrictions are lifted, a Service to Celebrate Carole’s Life will be held at Musella Baptist Church at a time that is appropriate and convenient for family and friends. The details of the service will be announced in a timely fashion, so everyone who loved and admired Carole can make plans to attend. Carole was born in Byron to the late Cary Franklin Hays, Jr. and the late Frances LaBelle Hobbs Hays. Her mother unexpectedly passed away shortly after giving birth to her sister, “Pannie,” when Carole was three years old. She and Pannie lived with her grandmother, Lucy “Mama Hays,” until her daddy married Susanna Hicks a few years later. When they moved to Musella with their daddy and Susanna, their family began to grow, and Carole became the oldest of five children. She graduated from Crawford County High School and went on to further her education at Georgia State College for Women (now Georgia College and State University) where she sang in the A capella Choir. Carole married Joe Terrell Mathews, Jr., who was enlisted in the Army, and they moved to various locations that his assignments took them including Columbia, South Carolina. When he was released from the military, they returned to Roberta, and Carole continued to be a homemaker, creating a warm and inviting home for their three children. They enjoyed many years of supporting their children in their various chosen activities, and after fifteen years of marriage, as life would have it, the family divided. Carole soon moved to Macon to start anew. She worked as a Secretary with Fickling and Company Realtors for several years, and after some time, Carole met and married B.W. Holland. They moved to Jacksonville, Florida, where they lived for fourteen years. She was an active member in First Baptist Church of Jacksonville. Upon returning to Roberta, Carole continued her love for ministering to others and Musella Baptist Church by serving through the years as a Sunday School Teacher, a Visitation/Outreach Chairman, and a Bible Study Teacher – having been one of the founding members of the Susanna Hays Bible Study Group. She was recently honored for her 25 years of service and devotion to Musella Baptist Church with a special ceremony and presentation. Her lifetime love of her family and devotion to prayer has been ever present during her recent journey and battle with cancer. She knew God had a plan for her life, especially her exit from this earth, as she had led several people to the Lord in the last year. Carole was preceded in death by her mother, Frances Hobbs Hays; her father, Cary F. Hays, Jr.; her mother, Susanna Hicks Hays; the father of her children, Joe Terrell “Bubba” Mathews, Jr.; her husband, B.W. Holland; her step-daughter, Pamela Holland; and a sister, Frances “Pannie” Hays Markley Trexler. Left to cherish the memories they made with Carole are her loving and devoted children, Joe T. Mathews, III (Nancy) of Roberta; Dottie Hester (Jimmy) and Maria McConnell (Rob), of Ft. Valley; seven grandchildren, Jason Mathews (Julia), Josh Mathews (Sunni), Lee Hester (Laci), Shelley Sloan (Allen), Robert McConnell, III (Taylor), Emma McConnell, and Madison McConnell; and nine great-grandchildren. Also surviving are her siblings, Buddy Hays (Pat) of Musella, Lynn Davis of Macon, and Shelley Turner (Tom) of Marshallville; and many nieces, nephews, great-nieces, and great-nephews. Condolences for the family may be left in the online guestbook at www.watsonhunt.com. Watson-Hunt Funeral Home has been entrusted with the arrangements.

ROBERTA &#8211; Carole Hays Holland, 85, went Home to be with her Lord and Savior on Friday, April 3, 2020, after a brave and courageous battle with cancer. Due to the current national pandemic and the limitations placed on the number of people... View Obituary & Service Information

The family of Carole Hays Holland created this Life Tributes page to make it easy to share your memories.

ROBERTA – Carole Hays Holland, 85, went Home to be with her Lord...

Send flowers to the Holland family.