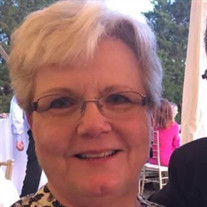 Bonnie Marie Starr Bryant, 70, went home to be with her Lord and Savior on Friday, February 19, 2021, after a brave and courageous battle with an extended illness. A Graveside Service will be held for the family in Perry Memorial Gardens. A Memorial Service will be held on Sunday, February 28, 2021, at 2:00 p.m. at Grace Church. In lieu of flowers, the family respectfully requests memorial contributions to Grace Church, 1736 Houston Lake Road, Perry GA 31069, or WROC – Women Reaching Our Community, 623 General Courtney Hodges Blvd, Perry GA 31069. Bonnie was born in Monticello, Georgia, to the late Clarence and Hazel Womack Starr. She graduated from Jasper County High School in 1968 and earned a Bachelor’s Degree from West Georgia College. She worked as a Social Worker with Jasper County Department of Family and Children Services for a few years before deciding to go back to college and pursue a degree in Education. Bonnie earned a Master’s Degree in Early Childhood Education and, several years later, a Specialist’s Degree in Education Administration, both from Georgia College. After teaching at Washington Park Elementary School in Monticello, she moved to Perry and taught at Perry Elementary School until it closed. She then transferred to Kings Chapel Elementary School and eventually retired from Perry Primary School in 2006 after teaching for thirty-two years. Bonnie primarily taught Kindergarten and First Grade. She was also the Director of the After School Program at Perry Primary. Upon her retirement, she contracted with Macon State College and University to supervise student teachers in their Education program. A founding member of Grace Church, she was on their Board of Ministers. She enjoyed Sunday School with her church family, and delighted in preparing the snacks for Vacation Bible School every summer. Bonnie traveled to North Carolina and Costa Rica on mission trips with the church, and hosted small groups at her home through the years. Since her husband was a military veteran, Bonnie became involved in the VFW Ladies’ Auxiliary, took part in organizing and operating their Ribeye Steak Sandwich booth at the Georgia National Fair, and worked innumerable hours in September and October each year at their booth for over twenty years. Her beautiful smile and friendly southern voice yelling, “Need a sandwich and a sweet tea!” to the crew will be dearly missed. Bonnie joined Women Reaching Our Community, WROC, shortly after they were formed, and was invited to serve on their Board of Directors, to which she contributed immensely. She actively volunteered at Re-New, their thrift store where they receive and sell donated home furnishings, using their profits to help the homeless in Middle Georgia. She was instrumental in preparing Re-New’s first location on Main Street by cleaning and painting the building. When Re-New moved to Macon Road, Bonnie was excited about the added square feet that would become filled with more donations and potentially lots more money for WROC’s projects. When the second location of Re-New was sold and WROC was forced to find a new location, the organization was heart-broken and upset to be “losing the homey atmosphere,” in which they gathered, planned, and prayed for each other and their community. But Bonnie’s positive attitude and huge faith led the women to believe that WROC would be blessed by the unexpected move. And blessed it has been. Bonnie was a Christian and was thankful for every opportunity to spread the word of Jesus to any- and everyone who would listen. Her strong faith was exhibited every time she talked about the numerous ways that God was seen in the things that she was doing and places that she went. In the final days before her passing, Bonnie wrote on Facebook that she was “going to see Jesus soon,” and encouraged everyone who read that post to have faith, just as she had done. She loved her family and treasured every moment spent with them, especially her grandchildren whom she hoped would be positively influenced by her words and actions of faith. Bonnie was a giver in all aspects of life and was truly an inspiration to so many. Just hours before her passing, nearly a dozen nurses and staff at Augusta Medical Center who had grown to respect and love Bonnie over the duration of her illness worked diligently to get her moved to a treatment floor, so they could join the family in surrounding her when she took her final breaths before meeting Jesus. The many simple actions of the people Bonnie impacted showed just how much she was loved and will be missed. Left to cherish the memories they made with Bonnie are her loving and devoted husband of thirty-two years, Ronnie Bryant of Perry; her children, Jason Robinson (Laurie) of Monticello, Amy Thomas (Paul) of Perry, and Ron Bryant (Ashley) of Ponte Vedra, Florida; her grandchildren, Will Robinson, Kate Robinson, Nichole Bryant, Josie Bryant, Sadie Bryant, Ethan Thomas, Caitlyn Thomas, and Courtney Daniels; a sister, Dianne Davis (Heck) of Eatonton; her brother, Terry McMichael (Carol Ann) of Monticello; and several nieces and nephews. Bonnie was preceded in death by her parents and an infant sister, Christine Starr. Condolences for the family may be left in the online guestbook at www.watsonhunt.com. Watson-Hunt Funeral Home has been entrusted with the arrangements.

Bonnie Marie Starr Bryant, 70, went home to be with her Lord and Savior on Friday, February 19, 2021, after a brave and courageous battle with an extended illness. A Graveside Service will be held for the family in Perry Memorial Gardens. A... View Obituary & Service Information

The family of BONNIE STARR BRYANT created this Life Tributes page to make it easy to share your memories.

Bonnie Marie Starr Bryant, 70, went home to be with her Lord...

Send flowers to the BRYANT family.