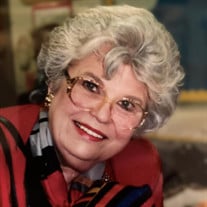 PERRY – Billie Davis Sexton, 89, passed away peacefully on Monday, January 25, 2021, after a brief illness. Private Graveside Services will be held for the immediate family in Evergreen Cemetery with Rev. Jim Shipley officiating. In lieu of flowers, the family respectfully requests memorial contributions to Friends of Perry Animal Shelter, FOPAS, P. O. Box 2001, Perry, GA 31069 or The Westfield School, P. O. Box 2300, Perry, GA 31069. Billie was born in Dothan, Alabama, to the late Mayo “Pete” and Kathryn Gaines Davis. The family moved to Perry when Billie was a young child, and she graduated from Perry High School in 1948. She always laughed, reminiscing that she was a Senior in high school twice, having been in the first class at Perry High School to attend for twelve years. She married her first love, 1st Lt. Virgil L. Cosey, and tragically lost him in an accident when their only son was just fourteen months old. Billie was blessed to find love again and married Bill Sexton. She was a homemaker all of her life and was devoted to creating a nurturing and inviting home in which the couple would raise four boys. In her younger years, she enjoyed playing golf and tennis, and was constantly on the go taking her children to their sports practices and attending the games as often as possible. Billie loved going with her family to UGA football games and Atlanta Braves baseball games, and was delighted to attend the Masters Tournament in Augusta several times, being so passionate about golf. Billie enjoyed opera, and once introduced to the game of Bridge, she became an excellent player, participating in various Bridge groups in town, often filling in for absent players as needed. When Bill was diagnosed with a physically debilitating illness, she was completely devoted to caring for him day and night, taking him to numerous doctor appointments, and sitting by his side while recovering from surgeries. Throughout her life, Billie was an avid reader, and always felt comforted when in the presence of animals, especially her cats in the later years. Billie was a member of Perry United Methodist Church for nearly fifty years. The family would like to extend a special thanks and is forever grateful for the kindness, care, and genuine love shown to Billie by the staff at Life Spring Church Home. Left to cherish the memories they made with Billie are her loving and devoted children, Davis Cosey (Diane), Mayo Sexton (Jeannie), and Colton Sexton (Thelma), all of Perry; her daughter-in-law, Vickie Sexton of Perry; those who lovingly referred to her as “Nina,” her grandchildren, Will Sexton (Kelly), Blair Greene (Ernest), Nola Taunton (Andrew), Hunt Sexton (Laura), Lee Anne Ulrich (Preston), Smyth Sexton, and Sam Sexton; and her eleven great-grandchildren. She was preceded in death by her husband, 1st Lt. Virgil L. Cosey; her husband, Bill Sexton; and a son, Jim Sexton. Condolences for the family may be left in the online guestbook at www.watsonhunt.com. Watson-Hunt Funeral Home has been entrusted with the arrangements.

The family of BILLIE DAVIS SEXTON created this Life Tributes page to make it easy to share your memories.

Send flowers to the SEXTON family.