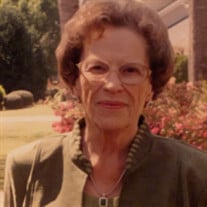 PERRY - Mrs. Betty Jean Turner Herrington, 91, passed away peacefully on Sunday, February 23, 2020, after a lengthy and courageous battle with dementia. Services will be held on Friday, February 28, 2020, at Zion Hill Baptist Church, 1808 Lake Jodeco Road, Jonesboro, GA 30326. Visitation will begin at 1:30 p.m., and the Memorial Service will begin at 3:00p.m. In lieu of flowers, the family respectfully requests memorial contribution to Life Spring Church Home, Rehabilitation and Healthcare, 2470 US-41 North, Fort Valley, Georgia, 31030. Betty Jean was born in College Park, Georgia, to the late Henry Marvin Turner and Vennie Frances Turner on January 31, 1929. Betty was the beloved wife of Calvin Rogers Herrington for 55 years. She married Calvin on July 7, 1948. He preceded her in death in May of 2003. Their firstborn child, Connie Diane, was born in 1950, but died shortly after birth. Betty gave birth to their second child, Debra Lynn, in 1954, followed by their son, Phillip Ronald, in 1960. Betty spent her life as a homemaker, volunteering at her children’s school as PTA President, and playing in the dirt with the College Park Garden Club. Betty found joy in serving her Lord, Jesus Christ, at Red Oak First Baptist Church for over thirty years. Betty and Calvin moved to Jonesboro, Georgia, in 1986, enjoying their new community and planting themselves at Zion Hills Baptist Church, making new friends that quickly became family to them. After the death of her husband, Calvin, Betty moved to McDonough, Georgia, to live closer to her son, Phil, his family, and her first cousin, Frances Stergess, who was also her childhood best friend. Betty and Frances enjoyed making new friends at McDonough First Baptist Church where they were involved in the Senior Ministry. In 2008, Betty was diagnosed with dementia. Her dementia began stealing the mother that was full of life and knew every detail of her children’s and grandchildren’s lives. With this diagnosis, Betty was unable to care for herself and moved to Perry, Georgia, to live with her daughter, Debra, and her family in 2012. She became an active member of First Baptist Church of Perry where she was a member of the Willing Workers Sunday School Class. In 2014, Betty moved to assisted living at Summer’s Landing in Warner Robins. After several illnesses and further deterioration, she moved to Life Spring Church Home in 2018, where she was continuously nurtured and comforted by her family and a faithful caregiver, Jessie Davis, until her final moments before being welcomed to Heaven by treasured family members and friends. Betty was preceded in death by her parents; her angel baby; her husband; her brothers, Harold Turner and James Turner; and her sisters, Clarice Young and Mary Yongue. Left to cherish the precious memories they made with “Memaw” are her daughter and son-in-law, Debra and Dan Stewart of Perry; her son and daughter-in-law, Phil and Kim Herrington of Brookhaven; a sister-in-law, Brenda Platt; her grandchildren, Chris Stewart, Jake Stewart (Beth), Jennifer Stewart Payne, Katie Smarr (Sam), Timothy Herrington, Adam Herrington (Hannah), and Joey Herrington; and her great-grandchildren, Jordan Stewart, Chance Stewart, Alexis Herrington, Samuel Smarr, Andrew Smarr, Lawson Stewart, Hadley Herrington, Lizzie Jane Stewart, Lowen Stewart, Ayvee Rose Herrington, and Mia Grace Stewart. A host of nieces, nephews, and extended family members also survive. Condolences for the family may be left in the online guestbook at www.watsonhunt.com. Watson-Hunt Funeral Home has been entrusted with the arrangements.

The family of Betty Turner Herrington created this Life Tributes page to make it easy to share your memories.

Send flowers to the Herrington family.