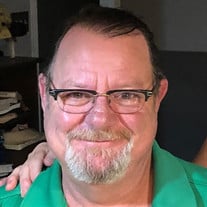 PERRY – Ben White, 60, passed away peacefully on April 2, 2021. A private burial is planned for a later date at Evergreen Cemetery in Perry. In lieu of flowers, the family respectfully requests memorial contributions to the charity of the donor’s choice or to the Palliative Care Service at Houston Medical Center, 1601 Watson Blvd, Warner Robins, Georgia 31093. Ben was the beloved son of the late Arthur, Jr, and Marge White. He was born into farming life in Houston County on February 16, 1961. He grew up helping his dad cultivate crops on beautiful farm land in the Centerville area. It was while learning farming and farm equipment maintenance that Ben became a lover of motorcycles. He rode his dirt bike all over 200 acres of land for years, Later Ben went on to make many friends in various motorcycle groups and was lovingly known as “Goober”. Ben graduated from The Westfield School in Perry, attended Abraham Baldwin Agricultural College, and then started his own trucking company hauling lumber and sod. In his later years, after spending time in Florida working in the engineering field, he went back into driving long haul trips all over the eastern United States. He enjoyed being on the road and seeing America. Ben will be sadly missed by his family - his sisters, Susie McInvale and Kathie Grubb; his niece Kendall Beasley; his nephews, Ben McInvale , Scott George, and Johnny Grubb. Ben was preceded in death by his parents, Arthur White, Jr, and Marge Brooks White; and his sister, Ann George. Condolences for the family may be left in the online guestbook at www.watsonhunt.com. Watson-Hunt Funeral Home has been entrusted with the arrangements.

PERRY &#8211; Ben White, 60, passed away peacefully on April 2, 2021. A private burial is planned for a later date at Evergreen Cemetery in Perry. In lieu of flowers, the family respectfully requests memorial contributions to the charity of... View Obituary & Service Information

The family of BEN WHITE created this Life Tributes page to make it easy to share your memories.

Send flowers to the WHITE family.