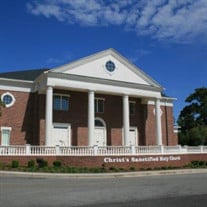 PERRY – Barbara Jean Bearden Miller, 82, passed away peacefully in her home holding the hands of her beloved daughter and niece on Monday, November 9, 2020. Funeral Services will be held on Saturday, November 14, 2020, at 11:00 a.m. at Christ’s Sanctified Holy Church. Interment will be in The Cemetery at Christ’s Sanctified Holy Church Campground immediately following the service. In lieu of flowers, the family respectfully requests memorial contributions to Christ’s Sanctified Holy Church, 791 White Pond Road, Leesburg, GA 31763. Barbara was born in Selma, Alabama, to the late Claude Thomas “Tom” and Early Knight Bearden. She became Sanctified at age fifteen and lived with various church members around the Southeast until she married. She was always a strong lady and believed in living her salvation, always sharing the word of God and witnessing to anyone she encountered. In her early married life, she endured a lot, losing two infant daughters, and then losing her husband unexpectedly after only nine beautiful years of marriage. Left with a six-year-old and a three-month-old, Barbara devoted her life to the Lord, to her family, and to her church, and moved to Harlem, Georgia, near Augusta, to raise her children. She worked tirelessly for years, always thinking of others, cleaning new houses for construction companies, preparing them for families to begin fresh in their new homes. After moving to Christ’s Sanctified Holy Church Campground in 1997, she began working at Pharmerica as a receptionist, which she did for fifteen years. During that time, she grew close to her co-workers whom she considered to be her family, and treasured her time working there until she finally retired at age seventy-six when her health would not allow her to work any longer. Barbara was a selfless lady, raising her children, while at the same time graciously accepting many responsibilities of others. Her home was always open for anyone in need. Barbara enjoyed cooking and would often cook for “half of the church” on Sundays. She was a member at Christ’s Sanctified Holy Church in Leesburg, enjoyed attending church, loved her church family, and was delighted to be in Sunday School, taught by Brian Collier, who will be preaching her funeral. Barbara’s mission in life was to care for others, and her mission was complete when she took her last breath here on earth and heard God whisper, “Well done, my good and faithful servant.” Left to cherish the memories they made with Barbara are her children, Kelli Miller of Perry, Jennifer Miller and Andrea Andrews (Sidney), both of Warner Robins, Michael Bearden, and David Bearden; several grandchildren and great-grandchildren; a brother, Richard Bearden (Bebe); and many nieces and nephews. Barbara was preceded in death by two infant daughters, Debbie Jean Miller and Cathy Lynn Miller; her beloved husband, George Henry Miller, Jr.; her only son, G. Henry Miller, III; three brothers; and two sisters. Condolences for the family may be left in the online guestbook at www.watsonhunt.com. Watson-Hunt Funeral Home has been entrusted with the arrangements.

PERRY &#8211; Barbara Jean Bearden Miller, 82, passed away peacefully in her home holding the hands of her beloved daughter and niece on Monday, November 9, 2020. Funeral Services will be held on Saturday, November 14, 2020, at 11:00 a.m. at... View Obituary & Service Information

The family of BARBARA BEARDEN MILLER created this Life Tributes page to make it easy to share your memories.

Send flowers to the MILLER family.