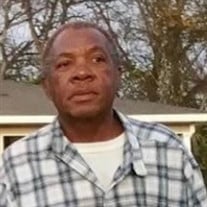 PERRY – After a hard-fought battle with an aggressive cancer, Arthur Lee Davis passed away on Thursday, July 9, 2020, at his son’s home while in the care of hospice at the age of 64. He leaves behind the love of his life, Mattie Robinson; their son, Mike (Cassie) Davis, and daughters, Jacqueline (Travis) Morgan and Nicole (Robert) Waller. Arthur was born on October 9, 1955, in Perry, GA, to father, Walter Davis, and mother, Mildred Loyd Davis, who both predeceased him. He grew up in a large, caring family with 5 sisters and 5 brothers. He was a crafted carpenter; he could build a house from the ground up. Arthur is survived by his 3 children (listed above); 14 grandchildren; 1 great-grandchild; his sisters, Mattie (George) Nunez, Christine (Robert) Daniel, Shirley Sutton, Connie Davis, Dana Davis; his brothers, Rowland Leggett Winifred Davis, Glenn (Tammie) Davis, and James Davis, as well as numerous nieces and nephews. He is preceded in death by both parents; his son, Chris Robinson; and a brother, Albert Davis. Arthur had requested to be cremated. A Memorial Service will be held at Watson-Hunt Funeral Home, 1208 Main Street, Perry, GA on Thursday, July 16, 2020, from 3:00 p.m. to 5:00 p.m. Join the family for repast at 107 Chaparral Drive, Perry, GA, at 6:00 p.m. Masks will be required at the family’s home. Flowers can be sent to Watson-Hunt Funeral Home. Donations can be made to American Cancer Society, 804 Cherry Street, Suite A, Macon, GA 31201 in the name of Arthur Lee Davis. Please leave messages for the family in the online guestbook at www.watsonhunt.com. Watson-Hunt Funeral Home has been entrusted with the arrangements.

PERRY &#8211; After a hard-fought battle with an aggressive cancer, Arthur Lee Davis passed away on Thursday, July 9, 2020, at his son&#8217;s home while in the care of hospice at the age of 64. He leaves behind the love of his life, Mattie... View Obituary & Service Information

The family of ARTHUR LEE DAVIS created this Life Tributes page to make it easy to share your memories.

PERRY –
After a hard-fought battle with an aggressive cancer,...

Send flowers to the DAVIS family.