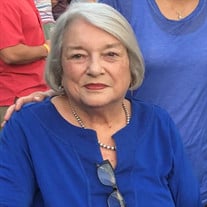 PERRY – Anna Sells Pritchett, 82, passed away peacefully in her sleep at LifeSpring Rehabilitation Center on Sunday, November 29, 2020, after a brief illness. Everyone is invited to participate in a safe-distance visitation by remaining in the comfort of your vehicle as you drive through the circle driveway at Watson-Hunt Funeral Home to show love and support for the family on Wednesday, December 9, 2020, from 4:00 p.m. until 5:30 p.m. Graveside Services to Celebrate the Life of Anna will be held on Thursday, December 10, 2020, at 2:00 p.m. in Evergreen Cemetery in Perry, where she will be laid to rest in the Pritchett family plot alongside her late husband and son, as well as her husband’s parents and grandparents. The family requests that everyone in attendance wear a protective facial covering. In lieu of flowers, the family respectfully requests memorial contributions to First Baptist Church of Perry, 1105 Main Street, Perry, GA 31069. Anna was born in Moultrie, Georgia, to the late Samuel Sells and Willie “Bill” Patrick Sells. She was a 1956 graduate of Moultrie High School, after which she attended Valdosta State College. It was there that she met the love of her life who eventually became her husband, Allen Candler Pritchett, Jr, on a blind date. They were married for fifty-one years and had three treasured children. Anna was a one-of-a-kind southern lady and a loving, wonderful, and spirited mother, grandmother, and friend. She loved people, bridge, and her family deeply. Anna was a charter member of the Beltista Club of Perry, was active in the club for over 60 years, and served in various officer and chairman roles through the years. She was also actively involved in other local charities, civic groups, and book clubs. Anna was a weekly player in several bridge clubs and enjoyed her friendships and social time as much as she did the game. She was very active in and loved her church, First Baptist Church of Perry, where she remained a loyal member and dedicated servant since 1959. She served as a WMU member, held several offices, including Chairman of the Charity Committee for those in need for over twenty years, and served on the Pastor Search Committee. She was a church Trustee, helped start the Round Table Book Clubs, and was an active member of the Avon Buice Sunday School Class. Anna was a formidable business woman and had a successful long-time career as a real estate agent in Perry. She worked with both Richardson-Free Realty and Landmark Realty over a span of twenty-five years. She was a member of the National Association of Realtors, the Georgia Association of Realtors, and the Perry Board of Realtors, where she was also a Lifetime Member of the Million Dollar Club. For many, Anna was the first person new prospective residents met in Perry, and many have reflected on what a terrific ambassador and tour guide she was for this special town. There were no strangers to Anna, and her knowledge of Perry’s rich history provided many a warm welcome. Anna was preceded in death by her husband, Allen C. Pritchett, Jr.; her son, A. Candler Pritchett, III; her parents, Sam and Bill Sells of Moultrie, Georgia; her brother, Sam Sells, Jr.; her brother, John Mobley, and his wife, Connie Mobley, of Moultrie, Georgia. Left to cherish a lifetime of memories they made with Anna are her caring and devoted children, Levin Pritchett of Sandy Springs, and Janna McBride (Fred) of Perry; her grandchildren, Ashley Snider (Cheyne) of Perry, Fred McBride (Hannah) of Savannah, Logan Pritchett and Laci Pritchett, both of Powder Springs; and her daughter-in-law, Kim Pritchett of Powder Springs. She also cherished her great-grandchildren, Evelyn Snider, Lilah Snider, James Snider, Preston McBride, and Piper McBride. Her many nieces, nephews, cousins and other extended family members were also dear to Anna. Condolences for the family may be left in the online guestbook at www.watsonhunt.com. Watson-Hunt Funeral Home has been entrusted with the arrangements.

PERRY &#8211; Anna Sells Pritchett, 82, passed away peacefully in her sleep at LifeSpring Rehabilitation Center on Sunday, November 29, 2020, after a brief illness. Everyone is invited to participate in a safe-distance visitation by remaining... View Obituary & Service Information

The family of ANNA SELLS PRITCHETT created this Life Tributes page to make it easy to share your memories.

PERRY –
Anna Sells Pritchett, 82, passed away peacefully in her...

Send flowers to the PRITCHETT family.