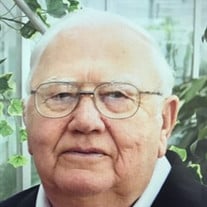 Alfred Samuel “Big Al” Cunningham, TSgt USAF (RET), 79, passed away unexpectedly on Sunday, March 3, 2019, after a brief illness. The family will visit with friends on Friday, March 8, 2019, at 10:00 a.m. in the Chapel at Watson-Hunt Funeral Home. Memorial Services will begin at 11:00 a.m. after the visitation at the funeral home. Al was born in Southfield, Michigan, to the late Edward and Ellie Jene Martin Cunningham. He grew up in Michigan and joined the military soon after the Vietnam War began. He proudly served our country in the U.S. Air Force as a Vietnam Veteran and received the Bronze Star. While he was stationed in Sculthorpe AFB in England, he met and married the love of his life, Jean Baker. The family was stationed at various locations while he was active in the military until he retired after 20 years of service as an Aircraft Mechanic. Al then worked at Northrop for 10 years and in Civil Service at Robins Air Force Base for 6 years. He finished out his working career reprogramming cable boxes for ComSouth for 8 years. Al was very athletic, particularly in his younger years playing basketball in high school, even coaching basketball for a while, and fast pitch softball in the military. He was a “handyman supreme” who could repair and build anything. He loved to work on cars in his garage that he built, and enjoyed working on projects for and with his family. Al’s athleticism continued throughout his life, as he was always an avid golfer. He was very much a “family man” and cherished every moment spent with his family. He was preceded in death by his parents and two brothers, Ed Cunningham and Ron Cunningham. Left to cherish the memories of “Big Al” are his loving and devoted wife of nearly 60 years, Jean Cunningham of Perry; his sons, Ron Cunningham (Caroline) of Warner Robins, Steve Cunningham (Lisa) of Goodyear, Arizona, and Don Cunningham (Debbie) of South Haven, Michigan; eight grandchildren; five great-grandchildren; a brother, Dennis Cunningham (Gladys); his only sister, Juanita Cunningham Grant; and several nieces and nephews. Condolences for the family may be left in the online guestbook at www.watsonhunt.com. Watson-Hunt Funeral Home has been entrusted with the arrangements.

The family of Alfred 'AL' Samuel Cunningham created this Life Tributes page to make it easy to share your memories.

Send flowers to the Cunningham family.