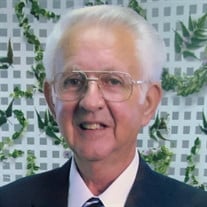 PERRY – Albert Lee Williams, 76, passed away peacefully in the early hours of Monday, December 28, 2020. Services will be held on Saturday, January 2, 2021, at Christ’s Sanctified Holy Church. Visitation will be from 1:00 p.m. until 1:45 p.m., and the Funeral will begin at 2:00 p.m. Interment will be in the Church Cemetery immediately following the service. Albert was born in Norfolk, Virginia, to the late Clarence E., Sr. and Maria Bates Williams. When he was five years old, he and his family moved to Columbia, South Carolina. While visiting his brother in Atlanta at age forty-one, Albert went to the altar and got sanctified on February 7, 1985. He moved to the Campground in Perry in 1986 and became his mother’s caregiver until she passed away. Brother George Murphy had been the Facilities and Grounds Manager for years, and he trained Albert to take over the position, which he did when Brother George passed away. Albert married the love of his life, Carolyn Forbes, on April 29, 2006. They were devoted to each other, to the church, and to the care of the campground and the people who live there. Anytime there was a need, the standard answer from anyone was, “Go ask Albert.” He spent many hours over a multitude of treasured years carefully maintaining and beautifying the buildings and grounds at Christ’s Sanctified Holy Church Campground until his retirement in early 2020. He was faithful in his duties and to the Lord. Albert enjoyed hunting, fishing, and serving others. He will be greatly missed by all those who knew and loved him. Albert was preceded in death by his parents; his brothers, Paul Amos Williams and Clarence Williams, Jr.; and his sisters, Pearl Williams Tate and Bernice Williams Simons. Left to cherish the memories they made with Albert are his loving and devoted wife of nearly fifteen years, Carolyn Williams, and his brother, Robert Williams, both of Perry; a sister-in-law, Lynn Williams of Columbia, SC; many nieces, nephews, great-nieces, and great-nephews; and a host of extended family members and friends. Condolences for the family may be left in the online guestbook at www.watsonhunt.com. Watson-Hunt Funeral Home has been entrusted with the arrangements.

The family of ALBERT LEE WILLIAMS created this Life Tributes page to make it easy to share your memories.

PERRY – Albert Lee Williams, 76, passed away peacefully in the...

Send flowers to the WILLIAMS family.