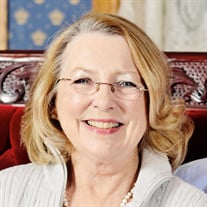 LEAVENWORTH, KANSAS - Adelia “Dee” Evans Richardson, 71, Leavenworth, Kansas, passed away on Tuesday, November 2, 2021, after a gallant battle with cancer and Frontotemporal Dementia. Services in Kansas at Beldon-Larkin Funeral Home will include a Visitation on Saturday, November 6, 2021, from 3:00 to 6:00 p.m. and the Funeral on Sunday, November 7, 2021, at 2:00 p.m. with Dr. Dave York officiating. It was Dee's desire to be transported to Watson-Hunt Funeral Home in Perry, Georgia, where a visitation for her lifelong friends and family will be held on Wednesday, November 10, 2021, from 10:00 a.m. until 12 Noon. Burial will follow, and her final resting place will be in the Richardson family plot at Woodlawn Cemetery in Adel, Georgia, at 3:00 p.m. Flowers will be graciously accepted or memorial contributions may be made to Heart of Georgia Hospice’s Hazel Colson House, 1120 Morningside Drive, Perry, GA 31069. Adelia was born January 12, 1950, in Ocilla, Georgia, the daughter of the late James W. Evans and the late LaVerne Cole Evans. Dee grew up on a farm in Kathleen, Georgia, helping her father with all aspects of farming. A member of Future Farmers of America (FFA), she drove the tractor and cared for the hogs and horses, as well as the various other farm animals. Dee graduated from Perry High School in Perry, Georgia, and on September 4, 1968, she married the love of her life, Robert “Bobby” L. Richardson, Jr., of Warner Robins, Georgia. Following marriage to Bobby, Dee went to work at Robins Air Force Base in Warner Robins as a clerk-typist, and Bobby entered the Army, thus, beginning their joint careers and dedication to their country. As Bobby moved from assignment to assignment, Dee continued her Civil Service Career. Some of her assignments included Assistant Director of the Fort Knox, Kentucky, Rod and Gun Club; Administrative Officer of Combat Developments at Fort Sill Artillery School; Adjutant of the Combat Equipment Group Europe (CEGE) in Manheim, Germany; and Administrative Officer of the Media Support Center in Fort Leavenworth, Kansas. As the Administration Officer of the Media Support Center, she was responsible for the personal actions of over 100 personnel. Dee ended her thirty-five-year career as the Commander's Freedom of Information Act (FOIA) and Records Manager, Combined Arms Command, in Fort Leavenworth, Kansas. As the FOIA Manager, Dee's expertise was known and respected Army-wide. On many occasions, the Army leadership sought Dee's review and input on critical policy decisions, which was a great honor to her. She received numerous awards during her distinguished career including Superior Civilian Service Awards and Employee of the Year Awards at two different installations. She was extremely proud of the fact that she received an annual cash award in every job she held in her thirty-five-year career. Dee was committed to the military community as a Girl Scout Leader, was a PTA Board Member, volunteered in the local Thrift Shop, and also served as a member of numerous community advisory boards. Her efforts were fully recognized by the Field Artillery Community, and she was awarded the distinguished Patron Saint of the Field Artillery Molly Pitcher Award. She cherished this award above all she received in her life. While the demands of her own job were great at times, Dee was a dedicated military wife and mother. She carried the farming experience with her everywhere she went with her love for flowers and gardening. She truly had a green thumb. As a homemaker, she was a master. She was a wonderful cook and the decorating queen. Every holiday held a new decorating theme for her home. Dee was a caring and passionate person who was always helping her friends as well as many people she did not know. She was selfless, always put others first, and lead by example with integrity, which was her foremost priority in all aspects of her life. She will always be remembered as a loyal and trusted friend who made a lasting impression on so many lives in so many ways. She truly inspired others to do and be better. Dee touched many lives, both professionally and personally, and will be truly missed. Dee was preceded in death by her parents and her brother, Joel W. Evans. Left to cherish the memories they made with Dee are her faithful and loving husband of fifty-three years, Bobby Richardson of Leavenworth, Kansas; her daughters and sons-in-law, Michelle and Rick Cheshier of San Antonio, Texas, and Dawn and Kyle Clausius of Olathe, Kansas; two grandchildren, Chase Clausius and Ella Clausius; her sister and brother-in-law, Sylvia and Charlie Gibbs of Warner Robins, Georgia; several nieces and nephews; and numerous aunts, uncles, and cousins. Arrangements have been entrusted to Beldon-Larkin Funeral Home in Leavenworth, Kansas, Watson-Hunt Funeral Home in Perry, Georgia, and Boone Funeral Home in Adel, Georgia.

The family of ADELIA "DEE" EVANS RICHARDSON created this Life Tributes page to make it easy to share your memories.

Send flowers to the RICHARDSON family.